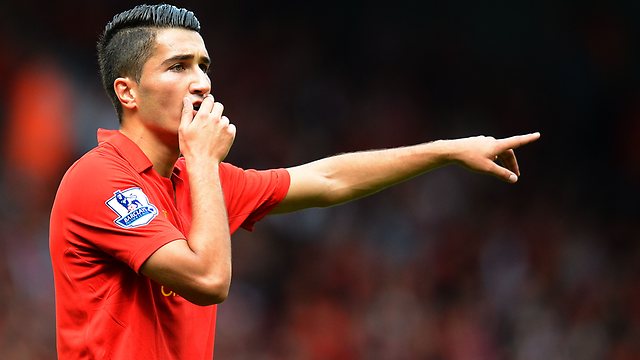 Sachin was born in Germany the son of Turkish immigrants making his debut for Dortmund just before turning 17 after a loan spell at Feyenoord in 2007-08 he returned to the Bundesliga and established himself in the first team winning the title in 2010-11 along with the honour of being named Bundesliga player of the year.

His talent was now getting the attention of some of the bigger clubs, including Real Madrid who took him to Spain on a six-year contract for £10 million. Injuries have hampered his impact on La Liga allowing him to make only four appearances for Los Blanco’s who’s coach Jose Mourinho thinks a spell in the Premiership will do the playmaker a world of good.

Liverpool have secured the midfielder for a year, and watching him for a brief spell against Arsenal  looks like the type of player to fit in well at Anfield, and Rodgers style of play.

In an interview on Liverpool’s website, Sahin recalled the night he was at the Ataturk Stadium when Liverpool came from 3-0 behind to beat AC Milan on penalties and win the Champions League in 2005.

“That year, I won the European under-17 championship with Turkey, so we were invited by the Turkish Football Federation to watch the game,” he said.

“We were sitting near to where the Liverpool fans were and it was just a crazy, crazy night. It was then I saw what football and Liverpool Football Club means to the people.”

When asked why he wanted to come to Merseyside Sahin said: “I turn 24 next week and I don’t care about money. I know that I will earn a lot of money in my career if everything goes well and it would be impossible in my situation and in my mind to put money above playing football.

I could have gone to many places and earned much more than here. The only reason I am here is that I know that I can play football, I know that I have a manager who trusts in me and the way I play, and I am at a huge club. That is why I am here.”